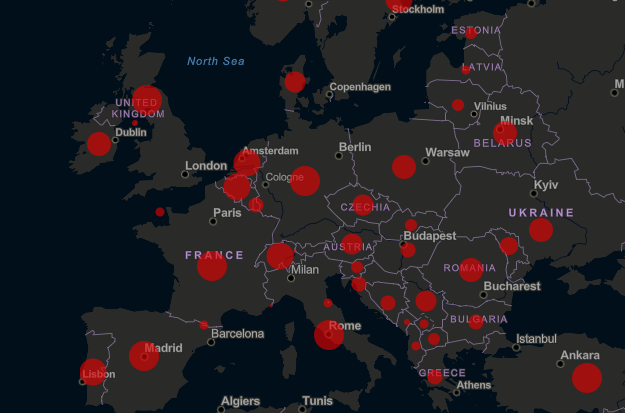 You may have heard the latest news around the Covid-19 epidemic. Whilst many states here in the US remain on lockdown, or at least partial lockdown, require face masks when we head out, and have even kept restaurants and some shops closed, Europe seems to have followed suit and eased their incredibly strict rules and measurements.

Since the global pandemic hit hardest, around February or March, depending on where you’re based, it still took some European countries far too long to lock down, causing thousands of deaths, with Italy even being named the epicenter of the pandemic.

Since Italy’s government decided to impose a lockdown so strong that they had police parading the streets using megaphones to warn the residents not to leave their homes at all, their numbers slowly and steadily decreased, a movement that forced other European countries to follow suit.

With most of Europe in strict lockdown – in France and Spain you couldn’t leave the house without a permit, and you’d be fined on the spot if you were found without one – the numbers of Covid-19 cases have begun to drop significantly, making crucial space in hospitals at over-capacity.

Around Europe, whispers began to spread that the peak – or the deadliest stage of the virus – was over. Once those rumors began, it became impossible to ignore them, with housebound residents all over practically begging for their freedom again.

Since the beginning of May, many countries have begun easing their measurements in an attempt to give their economy a helping hand, and to give their people a break from their confinement. In fact, in countries such as Denmark and Sweden, whose cases never became a horrifying mess, and where hospitals didn’t become overrun, they’ve almost completely gone back to normal life.

However, many people have spoken out against opening doors too soon, and warned that this drop in cases and deaths could result in another overwhelming peak if the necessary precautions aren’t followed, especially in countries such as the UK, where their death toll has risen to above even Italy’s. For now, at least, only time will tell.

All we know for now is that it will take up to two weeks for any data related to this new regime to take effect, as the Covid-19 symptoms don’t fully take hold and cause panic for up to 14 days. Does this mean that if there is a resurge in cases around Europe, the lockdown rules will be reinforced yet again? Perhaps even stronger than before? It could very well be a dangerous game. But where the economy and people’s sanity is concerned, if there doesn’t happen to be a resurgence of Covid-19, we could be well on the way to a summer of a little more freedom.

Let’s take a look at just how Europe’s countries are handling their new rules.

The Netherlands’ Premier, Mark Rutte, eased his country’s strict restrictions at the beginning of May, sending children between the ages of 4 and 12 back to school on half days, reopening smaller businesses including hairdressers and nail salons, and allowing up to 30 people at a time into cinemas and museums as of 11 May. The Dutch were never fully restricted, with anyone being allowed out for fresh air and exercise once a day, as long as they kept a distance of 1.5 meters and didn’t gather in groups of over 3 people.

In Belgium, the highest numbers of deaths happened to be in nursing homes for the elderly, although their numbers have also been on a steady decrease for a while now.

The Belgian Prime Minister, Sophie Wilmés has eased lockdown, allowing up to 4 people on visits to any one family in the country. The downside of this for many is that those 4 people are not interchangeable, making it more of a ‘pick your favorites’ activity. Whether people are abiding these rules remain to be seen.

Elsewhere, cafes and restaurants have the go-ahead to reopen from June, and schools may open this month, although no more than 10 pupils are allowed in a classroom at one time. Shops have also been reopened, as long as everyone sticks to 1.5 meters of space between one another.

Boris Johnson left the people of the England a little confused in his last televised speech, allowing people to go back to work, but without giving any guidelines as to how to stay safe, and who exactly should be going back to work.

Although the UK’s rules have been relatively strict, the people of the UK have still had free reign over their outings, as long as they didn’t see more than 3 people at a time, were staying far enough away from each other and using their time outdoors to exercise.

In Italy, one of the worst affected countries in the world, the strict lockdown period has ended, and people may now leave their homes for exercise. Although schools will not be reopening until September, bars, restaurants, museums, libraries, and hairdressers are all said to be reopening within the coming month. Sports teams are now able to train together, and even funerals are allowed to be attended by up to 15 people. It seems as though Italy has eased their rules the most out of all the European countries.

After strict lockdown regulations left them housebound, and needing a permit to leave their home for any reason whatsoever, the French now have access to the outdoors as long as they have a compelling reason to do so.

Schools are reopening this month, as well as most shops, but bars and restaurants still don’t have the go ahead, and will remain closed for the foreseeable future. Gatherings of 10 or fewer people are permitted, but the vulnerable or elderly have been told to use their common sense and stay safe.

Another country with serious lockdown measurements that saw police cars patrolling the streets, urging people to stay indoors, Spain have eased their rules and allowed their residents access to the outdoors for exercise purposes.

Outdoor bars and terraces are expected to open from June, and schools have already opened partially (they expect to open fully by September should all go to plan). Cinemas, theaters, exhibitions and shops are expected to open this month, but only on partial capacity, with admission tickets being required to be pre-booked.

Considering its large population, Germany has been less affected by the pandemic than some of the other countries on this list, and have eased their restrictions in accordance with how their residents have been acting.

All shops have been reopened, and schools have been partially reopened. Football matches are being allowed to take place, and two different households are allowed to meet up with each other for the time being. Whilst all festivals and summer activities are still called off until after the summer, who knows what they have planned for autumn should it all go to plan.

For now, only time will tell (2 weeks’ time in fact). What are your thoughts on how Europe are handling the current crisis? Could such a good outlook for the time being mean that travel restrictions also become lighter? How do you think travel will be affected by these measures? We’ll be looking into it next week, so join us again then, and as ever, stay safe.